I Was Plogging and I Didn't Even Know It

I heard once that the French don't care what you do as long as you pronounce it correctly. I don't know how far one can push that idea without garnering some major embarrassment if not a night in Jail du Nord. I do know that my French sucks, so they probably don't want me saying much of anything. After a certain episode in Nice in 1992 they haven't really wanted me there at all.

The Japanese have words for things that in other languages take half a day to explain. But I'm not sure they have a word for what I've been up to recently. Until the other day I didn't think anyone had a word for it. Then I discovered the Swedish term "plogging".

Doesn't really sound Swedish. Doesn't sound like something one would do in public either. Those who don't know what "plogging" is may or may not feel compelled to keep reading. Some might be quite eager to know what kind of embarrassing/committable person is behind this blog. But I am happy to report (and my mother is undoubtedly quite happy to hear) that the word plogging, a mix of Swedish and English, refers to the act of picking up trash while exercising. 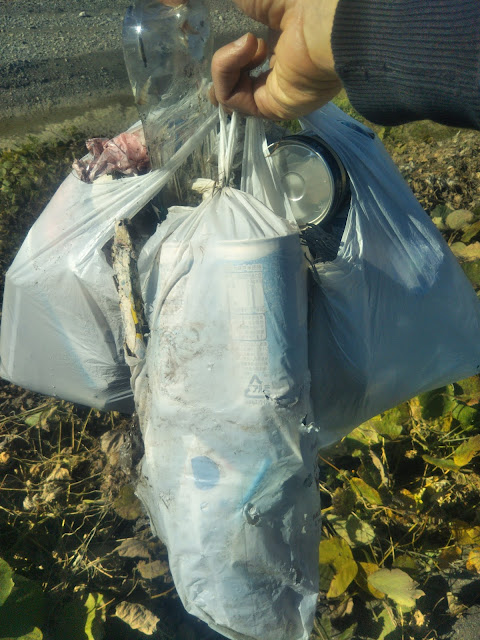 For someone who lives in a smallish Japanese town and tends to exercise in the woods and the mountains, it's easy to say "Yeah, I plog." Because frankly I don't come across much trash out there. A plastic candy wrapper once in a while maybe, or a can that might have been accidentally dropped though sadly, even here, people do litter.

Actually, I have never said "I plog." And I had never written it either until forty-five seconds ago. But according to the folks in the plog-o-sphere I suppose I would rank as a plogger.

I never intended to become one who plogs, but when I go out for a walk while my daughter splashes through another swimming lesson; when I'm out on a lazy bike ride because I just want to be outside; when I'm running errands on my bicycle, or picking my girl up from school on foot, or waiting for my son's soccer coach to finally stop talking so we can all go home and eat, sometimes I'll start picking up trash.

Sometimes I even stick a plastic bag in my back pocket before heading out the door. It's surprising how much crap there is on the ground out there once you try to hold it all in one hand. 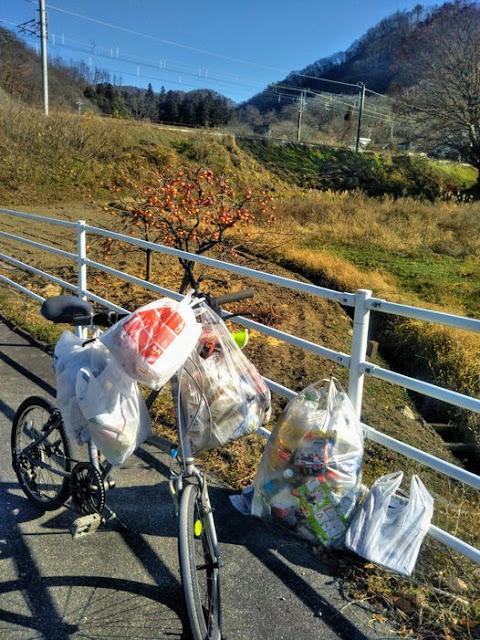 I also never intended to write about my grubby hobby. But here I am because: one, I didn't know until recently there was a whole grubby subculture of people who plog; and two, last Sunday morning I was out on my bike and, not able to help myself, kept stopping to pick up the drink bottles and bits of trash in the bushes and the grass. A woman was also out there, just on her morning walk I guess. I passed her, then when I stopped to dig out a plastic bottle from the shrubs she passed me. Then I pedaled by her but had to go over to the other side of the road to pick up a bag full of the refuse from someone's recent convenience store dinner. She passed me and, I think, started eyeing me - and possibly considered calling the police, just in case. I rolled down the road a bit more and bent down to pick up a discarded coffee can.

Beofre I turned down the road that would lead me home I glanced over at the woman. She had in her hands a couple of plastic bottles that, I can say from experience, looked like they had been in the bushes a while.

I don't know if that woman has ever heard - or ever will hear - the word plog. I can only imagine how she'd pronounce it. But it doesn't matter.

What matters is that we plog.