Saturday morning, and I’m on a train headed for Nagoya. The guy in the seat in front of me is dressed in a suit. His head turns side to side, slowly, barely perceptible as he peruses the newspaper in his hands. Watching him, I think of how each of us takes in the world around us.

For the next twenty minutes we’ll be passing through fields of rice, soba and grapes. Then the land will rise up and close in on both sides and we'll be rolling down into the steep, narrow Kiso Valley. We’ll follow the line cut by the ancient the Kiso River, along the Kyoto-Tokyo path the daimyo traveled when these places were known by different names.

South of Nakatsugawa the land will open up again, bringing more fields and towns I fear are slowly sinking toward extinction. The generations are no longer content with small-town tradition. By the time I get off this train we’ll be in Japan’s third largest city, a place that, though I’ve been to and through it many times, has left me with few lasting memories.

I do recall the time I bumped into my friend Hiroshi as we were both changing trains at Nagoya Station. He was on his way to nearby Gifu, to visit family still living in the town he grew up in. I was on my way further south with my then-girlfriend. All three of us were living in Fukushima at the time. In the middle of a crowded platform we laughed at our chance meeting. We snapped a quick picture to memorialize it. Then we continued on our respective ways.

If not for Hiroshi I might not remember I’d gone through Nagoya at all.

One other clear memory I have of the city involves that same girlfriend, when she had become my wife and the mother of my three children. My daughter was playing in a piano recital, a result of performing well enough locally to qualify for the regionals paired with my wife’s willingness to shell out eighty bucks for the privilege. Not to deny my daughter her pride, but I couldn’t imagine the qualifying threshold for this recital was all that high.

I remember the recital. Pieces of it anyway. I know my daughter did well, though I don’t recall the color of her dress. I remember the pouring rain. I remember paying an exorbitant price for parking. The restaurant we went to that evening was charming in its mom-and-pop simplicity. But mostly I remember the science museum we visited the next day. It was massive, enchanting, even for us old kids. It was so good my kids actually had to pause when I asked them later what their favorite part of the weekend was.

The eventual winner, of course, would be the hotel we stayed in. Jumping on the beds, watching TV until much too late, the buffet breakfast they almost slept through; what science museum could truly complete? As for me, the only thing I clearly remember is sitting alone in the lobby flipping through a travel magazine.

Today, as with so many of the days I’ve watched Nagoya rise up beyond the rice fields cross-cut with roads and telephone wires, I’ll just be passing through. I’m on my way to Kagoshima, on the southern end of southwest-lying Kyushu, to work as a guide on another cycling tour. Though technically work, guiding cycling tours is much more luxury than labor. It’s an escape I get to indulge in a few times a year because I was lucky enough to land the gig, and I’m lucky enough to have a wife who understands how much this feeds my soul.

“Feeds my soul.” The sentiment is painfully trite. But the thoughts, feelings and ideas that reside in the reptilian part of our brains do not lend themselves to linguistic expression. Such things are what I find myself most drawn to. Being out on the road is not just where I see the world beyond my immediate, everyday horizons. It is where I feel the world. It is how I connect to it. It is how I recognize and remind myself of the things that matter to me, even as I can’t express them.

We’re winding, clicking, gliding through the Kiso Valley. The river runs white and sapphire, tumbling over and slipping past innumerable whitened rocks and stones. The slopes of the mountains are dressed in their age-old pine green, today patched all over with the reds, golds and browns of the season. Long after I’m gone people will still be taking this train, watching or not the beauty of Nature go by outside their windows. Thoughts like this have recently been pelting my consciousness. And I think I don’t ever want to die. 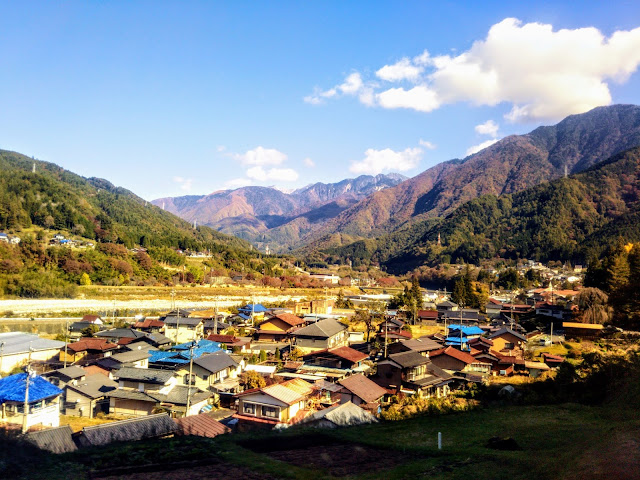 The man in front of me has put his newspaper down in favor of a pair of earphones tethered to his smartphone. Occasionally he rolls his head and takes a drowsy glance out his window. Most of the people around me – the ones I can see without coming off as intrusive – are fixated on their own phones. Three foreigners are standing in the space behind the conductor’s room at the front of the train, watching and taking pictures through the conductor’s eyes. One young man is reading a book – an introduction to the Koran, in Japanese.

From my window I see an old woman taking slow, stooping steps down a shady side road. Her back is to me. Still, I can see her face. I’ve seen a hundred thousand women just like her. They all wear the same basic clothes – loose pants, a heavy and worn long-sleeve blouse, and an over-the-shoulders apron with a big button in back. And they all have the same expression; one of indecipherable stoicism.

A white-haired man in generic working clothes is moving bales of hay, remnants from the recent rice harvest. He too is typical, of the millions of Japanese men his age: five-foot-eight, slender, agile; not working because he’s healthy, but healthy because he’s working. Not that this is entirely universal. My wife’s father was also five-eight, slender and agile when he went down with an aneurism one day. Now all he can do with a bale of hay is sit on it.

Just as abruptly as they appeared, the woman and the man outside my window disappear. I only saw them for three, maybe four seconds. Yet something about them resonates. I feel a connection to them that I don’t get from the people thumbing their phones a few feet away.

This time tomorrow I’ll be cycling through the Kagoshima countryside, about as far away as one can conceptually feel from Japan’s third largest city. Aside from what pictures I might take along the way, much of the visual detail of tomorrow will likely blur and fade over time.

But my reptilian brain will remember everything about the day, adding it to what it knows from all the days like it that have come before, feeding something that, I think, can never be too full.

Something that I hope will, somehow, never die. 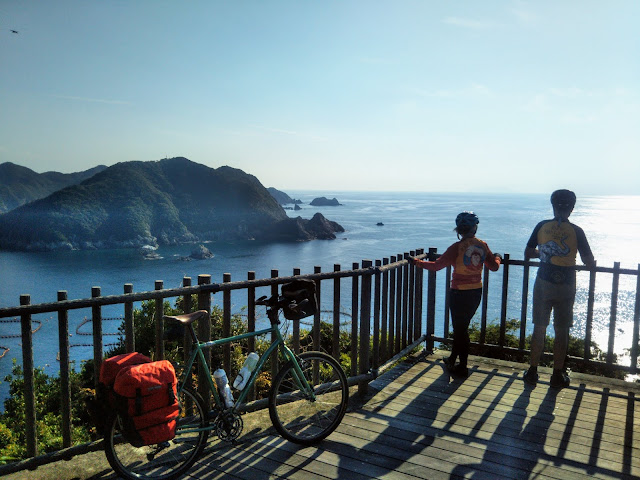