People Are Strange...When You're a Stranger... 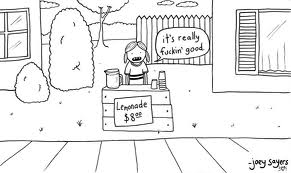 If you’ve been keeping up with my recent move to Long Island (and who hasn’t?) you’ll know that I’ve enjoyed and appreciated the people I’ve been encountering here in my new hometown. I mean, when the people working at the library are so boisterous the patrons have to look up from their books and laptops to tell them to be quiet you know you’ve happened upon a very special place. But as evidenced by the slovenly gray-haired schmuck I watched waddle over to the park area outside the library – he leaned on the fence surrounding the playground and started smoking and flicking his ashes around, then put his cigarette out by grinding the butt into the top of the fence and smearing the ashes around before finally flicking his scrap of dirty garbage into the sand where kids run around with their shoes off – there are a few people around who could use a steel-toed boot in the pants.


Take the trio of eight-year-old girls I saw selling lemonade by the side of their quiet residential road. They were out in the hot sun, making the attempt, and since I had to turn around anyway because I was lost I figured I might as well stop. Call it my beneficent act for the day. Besides, it was hot for me too, beer is criminally expensive here and I was already spending too much on toll bridges and gas. What could be better than a glass of homemade lemonade, procured the good old-fashioned way?

‘Hi guys, what do you have today?’

‘Hmm, sounds great!’ On the table were two pitchers, both pretty full. Taped to the front of the table were four – four – pieces of paper, each with ‘25¢’ written quite clearly in pen. One girl pours, another girl hands me the cup (barely ¾ full, I should have asked them to top me off) and the third girl takes my money, a dollar bill since I don’t have any quarters. There’s a shallow cardboard box on the table with a few coins. I wait. None of them gives me any change, they just get back to whatever they were talking about before I interrupted them.

‘So, should I just take my change from the box here?’

They look at me. One of them speaks up.

Now how is a grown man supposed to answer that?

‘Well, the sign says twenty-five cents, right? They all do, you know… actually.’

‘Yeah, well most people just give us a dollar.’

And they edged back into their private conversation.

‘Oh…so, have you had a lot of customers today?’

So apparently most of him gave them a dollar. I was beginning to regret my beneficence.

‘Your signs say twenty-five cents though, right?’ I left it at that, not figuring they’d just give in but not expecting…all right to be honest I didn’t know what to expect.

‘You want one more cup to make it even?’

…Make it even? Make it an even what?

‘Two cups would be fifty cents, wouldn’t it?’ And now I’m feeling like a cheapskate. Damn these girls were good. Not admirable, but good.

None of them answered me. One of them poured from the other pitcher, another handed me a second glass of pink lemonade in a second plastic cup. Two-thirds full. Maybe.

‘Which one do you think is better?’

They were entirely unimpressed with me.

I ended up not asking for - and not getting - any change. ‘Thanks,’ I said as I walked away, back toward my car.

They totally ignored me.

No worries, they’re just kids. Although if this little encounter were any indication of the kind of people they were learning to be I’d want to have a little chat with their parents. And maybe put a boot in their pants.

Sometimes I can’t help it and I find myself giving someone as sharp a verbal kick in the rump as I can manage. Invariably it happens when I see an able-bodied someone parking in a handicap parking space. These people try to ignore me too – they’re ignoring the entire world around them, to put it bluntly, and that crap doesn’t fly in my book so I have to open my mouth.

I swear, I hate when people think they are important.

They usually fire back with a glib and entirely moronic response. To which I’ll readily reply.

‘So where do you suggest my handicapped father park?’

‘No no, mentally does not count.’

It was September 6th. The family was now all moved in, but I still had to officially register my kid so he could start kindergarten that next day. One of the forms, asking me to state unequivocally that yes I did indeed live in the school district, needed to be notarized. I certainly didn’t know my new home well enough to have a handle on the local notary public scene, but I thought a good place to ask might be the post office, right around the corner.

There was a bit of a line, so I asked the guy behind me if he lived in town (he did) and if he knew where I could find a notary public. I gathered from his answer he didn’t know what a notary was. So I wait a little more and get to the counter and ask the guy sitting there (he reminded me of this Monty Python character) if they had a notary (they didn’t) so okay where could I find one. The guy didn’t know and didn’t seem to think he should either. I asked where city hall was; that had to be a good bet. ‘I don’t know,’ he said.

I thanked him for nothing and went up the street to the library, where they had a preprinted list of notaries in town. (Yes people, support your local library.) I found city hall on my own – not hard, it was on Main Street – and told my kid the good news. ‘You can go to school now!’ I said. ‘Okay,’ he replied, somewhere between appeasing my excitement and ignoring me.

As an aside, the next week I returned to the post office to find the same guy sitting in the same chair, same massive chin hanging over his collar. I was fourth out of five people on line. In front were two elderly women. It was 10:30 in the morning. The guy lurched forward, as if he were going to fall face-first onto the countertop. ‘Well, I’m going on break,’ he says, and he rolls onto his feet and waddles toward the back, totally ignoring the fact that he’s ignored the two women still standing there, now looking at an empty chair, one of them leaning on her cane. Are you kidding me? Now? You’re taking a break? A break from what? Ninety minutes of sitting in your chair not caring where city hall is?

I wonder what slapping someone with their grandmother’s handicapped tag would get me?

But I’ll say it again, to offset my whining: I’m enjoying the people here immensely. They’re always putting their furniture out by the curb for me to take; they explain locations of towns and state parks and pumpkin farms in relation to what exit off the LIE they are, as if they understand I’m from Jersey (a point that perhaps few except Jerseyans will appreciate); the cashiers at the supermarket give me member card discounts without the member card; people slow down at stop signs; I get free coffee at the realtor’s and the insurance agency, and in a random moment was invited to come to the soup kitchen over on 5th Avenue and Elwood Road on Friday mornings.

No place is perfect, but it’s all right here.

Now if only they’d do something about the price of beer.
Posted by Kevin Kato at 10:27 AM