Thanksgiving Shout to a Guy in a Bookstore in Tokyo

This Thanksgiving I want to send a shout out to the one guy in a city of 13 million who was willing to give me a shot. 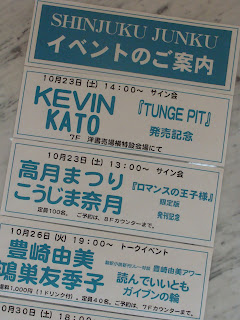 The goal was to convince one of the bigger booksellers in Tokyo to let me hold a book signing in one of their stores. So I started calling around.

“Sorry, we don’t do that kind of thing,” said the first person I spoke to once they’d deciphered my Japanese. “We don’t have many foreign customers,” said another. Someone from one of Japan’s largest and best-known chains told me to call back once I was famous – assuring that I wouldn’t.

I put down the phone. This shit was going nowhere.

I Was Plogging and I Didn't Even Know It

I heard once that the French don't care what you do as long as you pronounce it correctly. I don't know how far one can push that idea without garnering some major embarrassment if not a night in Jail du Nord. I do know that my French sucks, so they probably don't want me saying much of anything. After a certain episode in Nice in 1992 they haven't really wanted me there at all.

The Japanese have words for things that in other languages take half a day to explain. But I'm not sure they have a word for what I've been up to recently. Until the other day I didn't think anyone had a word for it. Then I discovered the Swedish term "plogging".