A government of laws, and not of men. 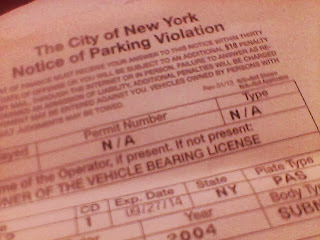 Ever get a parking ticket in New York City?

This past May I took my family to the Japan Day festival in Central Park, and after twenty minutes of driving in circles I found a spot four or five blocks from the nearest park entrance.

Now what need there is for parking restrictions on a Sunday I can not imagine. Neither, I would bet, can anyone in the monstrous entity that creates these rules but Hey what a money-maker!

The particular block I parked on is, according to the sign, quite busy between 4 and 7 every day of the week. Reality proves quite a different and, to the city, entirely irrelevant matter. It's 4 o'clock, your car is now a $115 nuisance.

I admit I have a chip on my shoulder when it comes to stupid rules and useless authority figures - in other words, anyone and anything that tries to tell me what to do. So I decided to tell NYC Finance what I thought about being ticketed at 4:11 because my one son had very recently dropped a massive bomb in his diaper and my other son was going to soil his Umbros if we didn't find a bathroom pronto.


Judge Schweinhund responded with a glib 'No evidence of error in fact or law' or some such jibberish and now my car had retroactively become a $125 nuisance.

On the back of the Honorable Pigdog's rendering was this irresistible bit:

Section C: Why you believe the judge’s decision should be reviewed.

I responded with the following:

I believe the judge is incapable of anything beyond regurgitating rules. Is this how the City generates revenue? By stationing someone at the top of the block at 4pm and having them begin writing tickets at 4:01? I was parked in the middle of a block which was still packed at 4:20 when I made it back to my car to find I had been ticketed at 4:11. So mine was presumably the sixth or seventh or eighth vehicle ticketed in the space of eleven minutes. There was no traffic congestion whatsoever on the street, yet because I did not want my one child to have to sit in the car in his own excrement while another would be forced to have a bowel movement in his shorts while I moved our car and looked desperately for another space so I could then find him a bathroom I am being fined $115.00. Please articulate to me the good sense in this.

If I was the only car on the block; if my vehicle was creating any disruption whatsoever to the flow of traffic; if my car had been there for any longer than the time it took for an individual to write an entire city block’s worth of tickets; if it were a work day (it was a Sunday); if I had any outstanding tickets for anything (I’d never gotten a single ticket in New York, I don’t even live in the City but my wife – who is from Fukushima, Japan and can no longer allow our children to live there due to the ongoing radiation crisis – wanted to go to Central Park for the Japan Day festival); if my car’s being there until twenty minutes after four had the slightest negative bearing on anyone or anything then I could understand a ticket. But for $115.00? Shall I assume the guy at the top of the block who missed by one minute was fined the same?

There is no apparent logic in this City’s institutionalized system of petty larceny, and clearly no measure of intelligent thought; there is only the ostensible purpose of creating revenue so people with no capacity to think can still have a job.

I believe that if the judge were in my shoes he would not want his children to have to sit in their own feces either.

A few weeks later I got a letter, signed by three judges, offering another bit of nonsense about the law or some other such silliness.

Ah well. I'm not at all surprised. Anyone can make up a story. And while mine was absolutely true, I could have included with my letter pictures of my one son's diaper and my other son's wild-eyed look of desperation and it would have made no difference. Everywhere I turn these days, from the heating oil company to my son's school, rules trump reason.

Come on, Schweinhund! It's only a silly law!

I wonder if they accept payment in nickels.