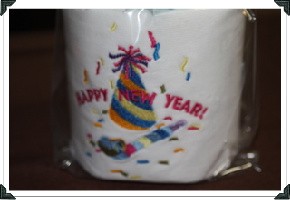 I thought that once I got married I’d be able to take certain things for granted. Alas, as many of us erstwhile bachelors realize too late, moments that would seem, quite intuitively, to come easier once we don’t have to hide them from the in-laws anymore, prove to be strangely elusive once the honeymoon photos are finally stored away on the external hard drive.

With kids it has gotten even worse. I’m talking in this case, of course, about ringing in the New Year with a kiss.

I wonder if my wife had a bad New Year’s Eve experience when she was a little girl. That wouldn’t adequately explain it though, since she’d made it until midnight every year we were dating. One year she was up until almost a quarter to one, though she was talking like a zombie by the end there, and she doesn’t even drink.


Now it’s not even close. Every night (when she isn’t stressing about the laundry, or when she doesn’t forget herself and have a latte after lunch) she lies down with the baby around 8 or 9 after the other two are bathed and unwound, and I know that the only action I’m getting is kissing another chance at romance good-bye.

On New Year’s Eve it’s never any different. It wasn’t on our first one as husband and wife, nor was it on the next; not any new year’s in the US, nor a single one in Japan; not last year, not this year, and I’m already taking bets for 2014.

But this past week I was at my mom’s house, and figured I’d be able to ring in 2013 with at least a few family members. But chips and dip and Ryan Seacrest are no match for age and 6am flights the next day, and by 11:30 I was sitting down to a Kahlua and coffee in the kitchen, resigned to raising my glass in a silent house, toasting to my own health.

There are still some things I can take for granted around the holidays. One of them is eating too much, and of things I don’t normally prefer to antagonize my body with. So what, it’s the holidays, right? New Year’s Resolutions are made to be made – after the dust of the debauchery settles. Anyway, I didn’t think anything of heading to the bathroom at 11:40. Ten minutes later I realized that, at least for the moment, it was too late to resolve to eat less – much less – sausage and cheese.

Visions of that huge ball dropping in Times Square did nothing to ease the pain, but as I paused to catch my breath and let the blood drain from my head I saw the silver lining. Being alone can be good, even at those moments you should be right there with the rest of the world, or the time zone anyway, getting smooched. Now was not the time to have family yelling ”Get out here Kevin it’s almost midnight!” Nor did I want to start their New Year off with having to help me find the plunger (never mind walking into the debacle I’d begun the year with). This year, it was best for everyone that I was all alone for the countdown.

Next New Year’s Eve I don’t care if the wife has any Kahlua, but I’m making sure she has some coffee.  And me, I’ll be sticking to the veggie platter.